Traditional planting activities on Mother’s Day: Getting people involved in brightening up a park in Ivano Frankivsk

The Kolping Family in Ivano-Frankivsk ran quite a few activities in May: “May has always been a busy month for us“, says Volodymir Schegda. The chairman of the Kolping Family tells us about plenty of activities: “This year is no exception: There are seminars and workshops for parents and nursery school teachers, an Easter marathon for families, a photo exhibition and workshops for children. We have a bakery that helps us support vulnerable families and last but not least there is the traditional planting of roses on Mother’s Day!“

It has become a tradition in the Kolping Family to plant rosebushes in a public park on Mother’s Day with the help of many volunteers. This special activity on this holiday is widely known and popular: residents and holidaymakers, internally displaced persons, representatives of local authorities, priests and the mayor all become active gardeners. 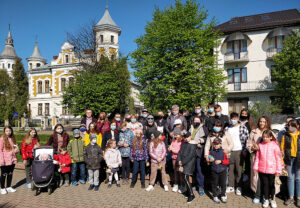 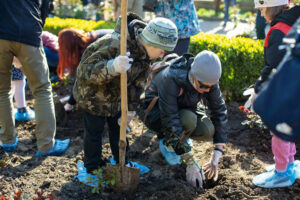 In addition, the Kolping Family in Ivano-Frankivsk runs special assistance programs for young families and especially for mothers throughout the year. It also tries to integrate families who had to leave their homes because of the conflict in Crimea and moved to their town.